A Christmas in the Summer

As young teens, our top hits were Jeruzalem and ‘Ere zij God’ – Glory to God.

We sang Jeruzalem everywhere -in school, at work, or in our minds while biking, but never in church.

‘Ere zij God,’ Glory to God, on the other hand, we sang in church exclusively, however, only once a year, on Christmas morning. After the service, the congregation as one stood up, making a noisy clatter as some two-hundred pairs of wooden clogs hit the floor as a prelude to the long awaited song.

The organist presented the tone height, held it for two long seconds, (in which he threw open a few more registers) and then the congregation broke forth like an held-back arrow, at last, being released by the marksman, shooting for its target.

On top of our lungs, with one voice, we joyfully shouted ‘Ere zij God, Ere zij God, In de hoge.‘

Glory to God, Glory to God, In the highest! Followed by a prayerful ‘Vrede op aarde,’ Peace on earth, moving onto ‘In the mensen, Een welbehagen.‘ Into people, a delight. Closing with a solemn ‘Amen’.

‘Ere zij God‘ is taken from Luke 2:14, when a multitude of angels praise God with the words of this song after one of the angels announces the birth of the Savior.

The tradition of singing Ere zij God at Christmas went with us when we immigrated to Canada, but after a few generations our offspring wanted to quit the tradition, not because of the song but of the language it was written in – Dutch. Some preachers, without roots in the old country, were not so secretly supporting that idea and sometimes tried helping it along by forgetting to mention it on the bulletin. That happened to a former minister of ours who, after delivering his Christmas sermon tramped, as was his tradition, straight for the outside entrance to shake hands with his flock as they filed past him.

Except, not a soul moved. After a few anxious moments, one brave woman started to sing the first chant of the disputed song ‘Ere zij God.’ The congregation and the organ joined immediately the brave woman, and according to the first ones out of the door, so did the preacher. Yes, in Dutch.

Some years later we met a baker in the city we were living. He was a large man with hands as big as shovels. When he shook hands with you, which he liked to do with a grin on his face, you felt it.

There were still several things too Dutch for some to have a place in the church, for instance, the church-organ. That grand musical instrument had to make way for a piano, which after some time got replaced by a fellow playing the guitar. The Psalms of David were replaced by chants on an overhead screen. The worship committee deemed it necessary to get a small version of house organ to accompany the piano. Our baker, retired now, had become an elder, and during a consistory-meeting told the preacher in no uncertain words to get rid of it ‘because I hate it.’

“It’s not an organ, it’s not a piano,” he said, “all it is, is some sort of a tingle-tangle, only good for the scrapheap…” but the tingle-tangle stayed.

Then one sunny summer day the old baker passed away.

“Even the strong ones fall,” the liberal preacher said in his funeral sermon. The church was packed, heating the church building considerably. The fans were whirling at top speed while doors and windows were opened wide, still, the heat was scarcely bearable, however, according to some members the message of the preacher had been a good one, and that was at least something positive on this hot day, one of them remarked.

When after the service the baker was carried to the open front door by members of his large family, a peculiar sound drifted over the congregation, who were already following the family on the way out but thus far no one paid heed to the unfamiliar sound, as all were anxious for some cool air, but when gradually the sound did penetrate they realized that it was the sound of someone playing – the tingle-tangle? Without the support of the piano? But they were stunned when they recognized what was being played on the little tingle-tangle. Ere zij God? At a funeral? And in the middle of summer?

The congregation, after some bewildering moments, caught on fast, and sang their hearts out, being led by the granddaughter of the departed baker doing the playing. After the last Amen all were united in thinking how appropriate it was to honor the departed baker by singing Ere zij God.

Had the baker himself been able to hear his granddaughter play that day, he likely would have said, “Well, I’ll be darned, that girl is going places yet. On the tingle-tangle. I would’ve never guessed.”

He was just that way. 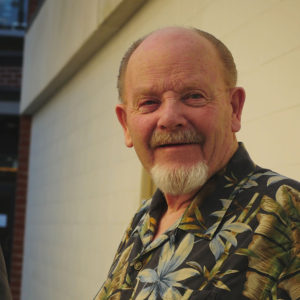 Lex lives in the Pavilion Apartments at Menno Place. He is passionate about writing and telling stories. You can find more of his work on his website -

Getting to Know Our Team – Dan Janzen, Social Worker
Scroll to top