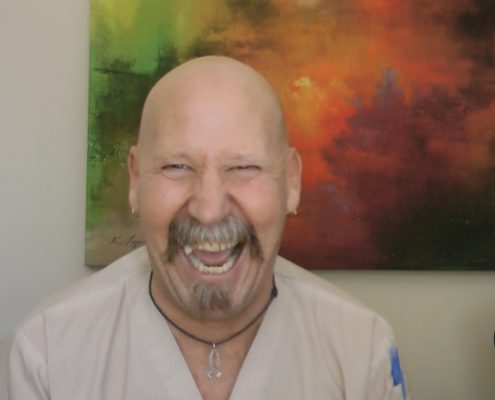 Bryan Gay is a bundle of passionate compassionate energy. Arriving late to care-giving, Bryan is grateful for the opportunity to play a significant and loving role in the lives of the elderly dementia patients in the special care unit at Menno Home. An avid learner, Bryan sees himself as a sponge seeking all of the latest information and skills to best care for the residents in Menno Home. Bryan avails himself to every in-service that happens here at Menno Place as well as throughout our health region. Bryan is taking in-services weekly as well as off-site education on a regular basis. In addition to the formal training, Bryan looks to his colleagues to teach and train him the fine and artistic points of caring for a resident with significant dementia. He is deeply moved by the level of care that he is entrusted to provide as well as the exceptional people that he works with.

Bryan came into the career of caregiving in his 50’s. He considers himself a late bloomer and has a significant level of respect and admiration for the “unsung heroes” who have provided care in our community for 20, 25 and more years. Throughout his career, he has learned to listen to the elders and empathize with their experiences. Bryan has chosen the challenging special care unit as his workplace of choice. This unit is a locked down space, called the Chalet, that is home to 22 residents suffering from severe dementia or Alzheimer’s. Like his colleagues on this unit, Bryan shares a deep preference for these people at such a vulnerable time of their lives. With alternate caregiving opportunities abounding on our campus and in other settings, he continues to choose this challenging environment to bring his skills and passion to his job. It is his calling.

Bryan is known as a high-energy, deeply connected individual. His positive attitude stems from a deep faith and a profound hope that he found in the second half of his life journey. His skills are impeccable, his appetite for learning is insatiable and his enthusiasm is contagious.

Bryan was very reluctant to have his name submitted for this award. He is a humble man who admires and respects his colleagues and doesn’t feel that his efforts should be acknowledged above others. He considers himself a part of a very skilled, compassionate team. Bryan’s colleagues adore and respect him. His manager, along with others in leadership at Menno Place eagerly submitted his name for this award. He is outstanding in his skills, his level of professionalism and his connection with the residents, their families and his colleagues.

WHERE TO LIVE ON THE MENNO PLACE CAMPUS