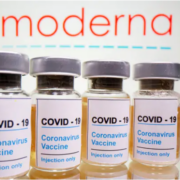 The Best Christmas Present for 2020 – Moderna COVID-19 Vaccine for our Residents!

We are beyond excited to let you know that Fraser Health called us this afternoon to let us know that all residents of Menno Home and Menno Hospital (long-term care) will be provided with the MODERNA COVID-19 vaccination.

We are working with our pharmacy, Rexall, to organize the details of storage and the team to provide the vaccinations. The great news is that this vaccine can be brought to our residents and they do not need to be moved off campus in order to get this vaccine (unlike the Pfizer vaccine that had to be stored at -70C).

All primary contacts will be contacted for consent for their loved one to receive the vaccine when it becomes available. All residents will be screened for allergies and sensitivities to ensure that there is not a contraindication for anyone. This vaccine has not, yet, been approved by Health Canada. It will arrive 24 – 48 hours after regulatory approval.

Menno Place will, with Fraser Health and other long-term care homes make our plans with the assumption that the Moderna vaccine will be made available.

As we move forward, we will advocate for all the seniors who live at Menno Place (Assisted Living and Independent Living) to qualify for this vaccine.

We continue to send our staff for vaccination with the Pfizer vaccine. We are sending 65 staff per day to the vaccination clinic. Pearl Nucich, our Executive Assistant has done an exceptional job in pulling together this administrative task! Our staff are eager to have and bring this safety to their lives and to Menno Place residents. 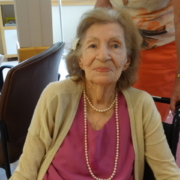 We celebrated Riza’s 100th Birthday together this month!
It was a lovely celebration – click here to read more of Riza’s story… 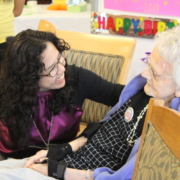 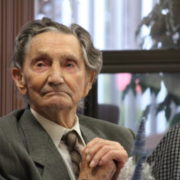 On January 6, 2015, Siegfried Bartel smiled with content surrounded by his family and friends who celebrated his 100th Birthday.

Born in a time when the US House of Representatives was denying women the vote, neon tubes were patented and the first coast-to-coast long distance call was made, Siegfried has lived through the incredible and rapid changes of the 20th and 21st centuries. World War 1 had just begun to rage across Europe when Siegfried’s mother prayed a prayer of blessing upon her unborn child.

Growing up in Prussia (Poland) in a Mennonite community, Siegfried enjoyed a privileged life earned by the hard labour of his farming family. As a young boy, he watched his father extend grace to a man whose drunken negligence caused a train accident that took the lives of his mother and oldest brother.

It was natural for a man of German descent to enlist in the German Army and Siegfried did so in 1937 before the second world war. When the war erupted in September of 1939, he found himself in an army that eventually brought horrors to others and convinced Siegfried that pacifism was the only sane response to killing and war.

During the war, Siegfried married Erna and started a family. Seven boys were born into his family as Siegfried went back to farming to earn a living. In 1951, he received refugee help through Mennonite Central Committee (http://www.mcccanada.ca) to re-establish his life in Canada becoming a dairy farmer in Agassiz, BC. Siegfried became an active participant in the community as well as serving in leadership with MCC from 1972 – 1987, grateful for how he had received refugee help in his time of need.

Siegfried’s birthday celebration was a vibrant afternoon party with friends and residents from Menno Home joining in the festivities. Five sons, six daughter-in-laws, one grandson and one great-granddaughter and the staff of Menno Place celebrated as well. Siegfried’s older brother, Hans, age 103 came over from Primrose Gardens Apartments with his wife to celebrate his brother’s life and enjoy a delicious piece of home-made cake and some German music. Ingrid Schultz, Chaplain, shared highlights of Siegfried’s life of faith and a prayer of blessing upon his life and the lives of those who love him.

Siegfried is the author of two books, Living with Conviction and Journey to Pacifism. In these books, he shares his life’s story and resulting convictions about pacifism and dedication to others in need. Happy 100th Birthday, Siegfried from your friends at Menno Place, Abbotsford Retirement Home. 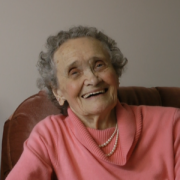 Esther Unger moved to The Apartments before she “quit loving life”. She laughs with energy as she shares her move to The Apartments. Her move was motivated by her good friend, Marion who already was living at The Apartments. Esther was healthy and feeling strong when she moved in. “I’ve never looked back” she says. 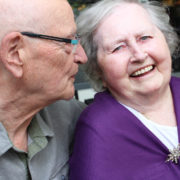 Susi and Josh Kramer have made their home at Menno Place. When they moved to the Menno Place campus, they didn’t know what obstacles or circumstances they would have to face. They raised five children together when Susi’s health began to decline. That was 24 years ago. With every step, they asked God for strength, for health and riches. Instead, they were given weakness, infirmity, “just enough”. In spite of their struggles, they confidently and sincerely say that among all people, they are most richly blessed… They have found the calm in the middle of the storm – and that calm is together in the comforting care of Jesus.

After moving to Menno Place’s apartments, the journey was difficult and Susi’s health failed rapidly. God provided a home for her in residential care in Menno Hospital. She appreciates the additional care and affectionately jokes with the staff as they meet her physical needs.

Susi and Josh are a couple who have grown to love and depend on each other deeply. “I know that I can trust that he is coming to visit” says Susi. Josh comes to visit her five times each day, walking over from his apartment on another corner of the campus. “I love visiting her”, he says affectionately, “The Lord allows me to care for her. I don’t know how to call it different… this is total dependence and a privilege”.

Susi and Josh benefit from the community of care through spiritual and physical support. They also give their lives wholeheartedly to the people who come into their circle of life, endearing many to themselves. It is in these friendships that others find a joyful encouragement.

Josh smiles and calls Susi, “honey” and “sweetie” as she tells the story of promising her father she would come back to The Netherlands after a short trip to Canada. “Oh well”, she says, “I met Josh and I had to stay.” They laugh, knowingly. When they married 53 years ago, she got the giggles and he was so nervous he couldn’t eat. They are so comfortable together now, it’s hard to believe that they would ever be jittery together. Watching this couple connect, it is easy to recognize the unconditional, genuine, proven love between them.