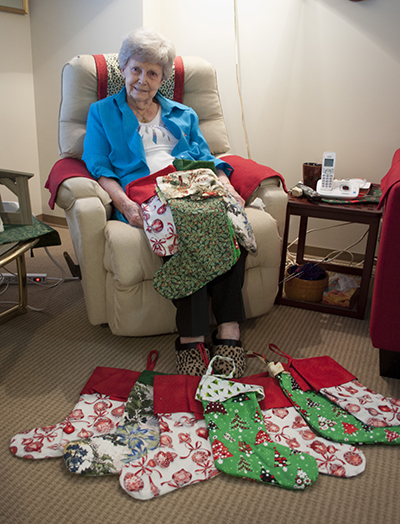 It looks like Christmas in Freda Teichroeb’s little apartment. She’s decorated her home with all the joy and flair of a true Christmas-lover: a festive wreath hangs on the door, another in the living room. Her table is covered in a pretty red and green tablecloth. At her window, a little decorated tree stands atop a table surrounded by more ornaments, a beautiful nativity set, and lit-up village houses. Christmas carols play softly in the background. 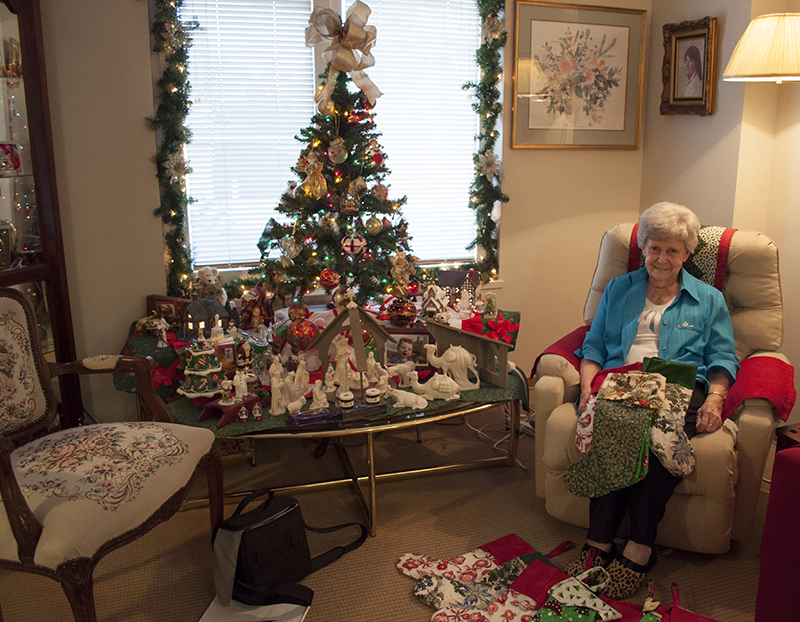 “I’ve always loved Christmas,” she says. “I decorate early and leave things up until the New Year.”

But Freda’s love of Christmas goes much deeper than surface decorations. At the heart of this season is the message of giving, and Freda lives this out all year round. It is a value that is borne out of her deep faith in God and a desire to share her gifts with others.

“All my life I’ve been a faithful giver, tithing and supporting missions,” she says. “Then when my health began to fail, I really talked to the Lord and asked how I could continue to serve and give.”

The answer came through her sewing machine. Freda has sewn all her life. She and her husband Henry, a school teacher, raised their three children in Saskatchewan and she sewed all their clothes including coats and snow suits.

“My daughter always said that she had the nicest Christmas dresses,” Freda recalls.

They moved to B.C. 30 years ago to be closer to Henry’s aging parents. Freda managed a gift shop in Sevenoaks Mall called The Panhandler and Henry managed Alliance Manor, a rental apartment for seniors. They attended the Alliance church and then Clearbrook M.B. Church where they are still members. Over the years, the Lord has blessed them with seven grandchildren and one great-grandchild. Now in their late 80s, health challenges have necessitated a change in lifestyle. Henry lives in an extended care home while Freda’s assisted living arrangement gives her both the support and the independence she needs. Throughout her life’s journeys, her little sewing machine has traveled with her, so it was only natural that the answer to her prayer was to use her sewing skills to bless others. It was also natural that her skills and her love of Christmas would come together.

Freda began to sew Christmas stockings. She began by sewing them for her children, filling them with crayons, socks and books. She’d wrap everything carefully so that they had something to unwrap. She enjoyed it so much, she decided to sew stockings for sick children in Vancouver. She sewed 50 stockings that were so enthusiastically received that she decided to sew more – 250 more.

Then this summer, while attending a Lady’s Tea, a woman who was familiar with her abilities asked if Freda would consider sewing stockings for the children at Matthew’s House in Abbotsford. Matthew’s House is a ‘home away from home’ that provides respite care for children with complex health care issues, giving parents a chance to rest and rejuvenate.

“I thought it was a wonderful idea, so I did!” she says.

It takes a commitment from the community to keep Matthew’s House running, costing $860,000 annually, all of which comes from generous donations. When Alan Cavin, resource development coordinator for Matthew’s House, first received a call from Freda about her idea, he was moved by her desire to share her gifts with the children at Matthew’s House.

“We really value Freda’s generosity and her creativity,” he says. “Each child connected to Matthew’s House will receive a stocking and she has made dozens more for us to use to raise funds for Matthew’s House.”

Each stocking is made from high quality fabric that has been pre-shrunk so that they can be washed. They are fully lined and come with a strong loop so they can be filled and hung from a mantle. In the two years since she began this project, she has sewn more than 1000 stockings and continues to sew more. When asked why she keeps on doing it, a smile lights her face.

“I really feel that the Lord guided me to know that children would get smiles and joy from these stockings,” she says. ‘In my heart, I am doing this for the Lord and I feel so good doing it for Matthew’s House.”

Freda’s Christmas stockings will be available at several Matthew’s House community events this season: December 5th and 6th at the Lepp Farm Market Christmas events and December 6 & 13 at Sevenoaks Mall. The cost of a stocking is a donation to Matthew’s House.

We devote ourselves to instructing and building up one another by recognizing and celebrating excellence, effort and success
Is this the future for nursing homes?