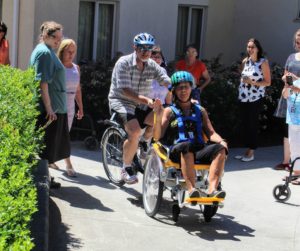 [Press Release, Abbotsford BC] – One bicycle, four provinces, 1,700 kilometers – this was the journey that Dale Carlisle, Recreation Aide at Menno Place embarked on to raise awareness of Alzheimer’s Disease in Western Canada last fall. In his daily work, Dale supports those living with dementia through a walking program, a woodworking club and the new Duet Bike initiative at Menno Place.

A lifelong cyclist, Dale was set into motion when a close friend was diagnosed with a rapid form of early-onset Alzheimer’s disease. 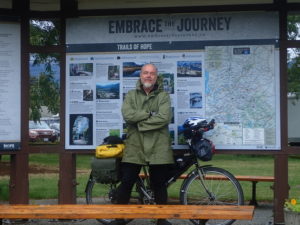 “I’ve worked with dementia among the elderly for several years. I was personally impacted when I started to see signs of dementia in a friend near my own age. I wanted to do something more. I wanted to make a difference.”

Dale challenged himself to bike from Winnipeg to Abbotsford to spark conversations about dementia with everyone along the way. For 21 days, through never-ceasing rain, idyllic prairies, and stunning mountain passes, Dale worked his way across Western Canada, achieving his goal of encouraging authentic conversations about living with dementia.

“In some ways, my ride mirrored the journey that people and their loved ones affected by dementia travel. The landscape, while familiar in some ways, was ever changing and each day brought unexpected challenges.”

Dale’s love of cycling is the reason that he jumped at the opportunity to be the champion behind the new Duet Bike initiative at Menno Place. The Duet Bike is a two-part adaptive bicycle that allows a resident to sit in a modified wheelchair while someone pedals and steers behind them. It is a well thought out design that provides the ability for a resident to experience cycling outdoors safely in the company of a trained companion.

Marrying his love for cycling with his passion to support those living with dementia, Dale shares his heart, “I am particularly excited about the Duet Bike here at Menno Place because it provides care in a holistic way that addresses the needs of the whole person. It provides a positive physical experience, time for quality social interaction, and a spiritual component through close exposure to nature. This brings so much purpose to my work.”

On September 16, Dale and a Menno Place resident will launch the Duet Bike initiative at the MCC Ride for Hope, bring yet another measure of awareness and conversation to those who see these joy-filled cyclists ride by.

Folder with all resources

– High Res Photo: Dale Carlisle at the end of his ride

We devote ourselves to instructing and building up one another by recognizing and celebrating excellence, effort and success
Upcoming Events – September 2017

Getting to Know Our Team – Bas Kervel – Manager of Environmental...
Scroll to top